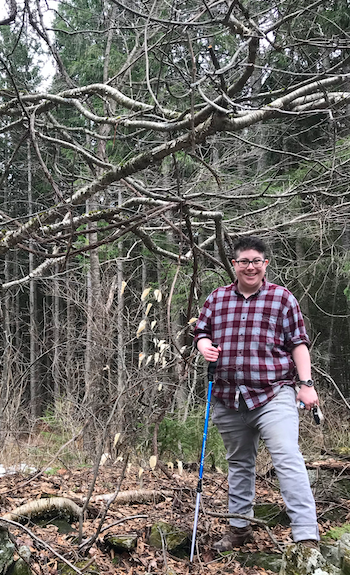 We talk so cavalierly about love and death. Flip on the country station for a while and listen; for that matter, the pop station, or anywhere you’ll hear (usually) a man professing how he cannot or will not or does not want to live without the love of this woman (again, usually). There is no pause in the lyrics, nothing to actually address the mortality, and I fully understand that it is a turn of phrase. To profess that you would rather die than live without, that you don’t want to even breathe without, is to walk with a privilege forgotten by those who have lived with loss. To announce that there is no way, even in the romanticism of song lyrics, that life could possibly continue after the death of your beloved, is blind arrogance.

When we married, Hawthorne carefully curated the list of approved songs to make sure there was no mention of death in the lyrics. We didn’t mention it in our vows; the closest we came was using an instrumental of “The Luckiest,” which has a verse about an old couple who passes away within days of each other. Even then, we both were too well acquainted with death; had felt that cold hand rest on ours as we tried to pump life back into a still heart, had lost enough of our own to not be intimately aware of our own mortality. We refused to invite death to our wedding.

And yet, it found us in our marriage, time and time again. I think I’ve thought about the movies of the Final Destination series more in the past year than I have ever before. Logically, I know that death touches everyone; and in pandemic times, even more so. I get that. It doesn’t mean I’m OK with it, or that I can easily accept it, or that it changes the individual losses experienced by each person.

I’ve been talking a lot about the difference between seeing patients and population health at work recently. I am privileged enough to work with a group of great providers and staff who care about their patients. In my position, however, it’s integral that I see both the forest and the trees. It’s harder for the folks who see patients to do that; they sit for a few minutes to an hour with individual people, learning about them and what they are feeling and experiencing. I’m grateful that I know what that is like from my paramedic days, that I have that background to draw from.

But I am also trusted to remember the fact that we are serving both individuals, and a population. From that 30,000 foot view, it is not the individual that we are caring for: it’s the subset of people who have breast tissue and need mammograms, it’s those who have high blood pressure and diabetes, it’s kiddos under the age of two who need their vaccines. In that thinking, the individual is not the concern, it’s the group. I realize that sounds callous, but both views are absolutely necessary.

The fact that I have lost so many in my time and in my family means nothing in the grand scheme of life and death in this world. How many people, lives, relatives, humans died in the past week due to disasters or the pandemic? Over 600,000 have died directly from Covid-19 or its immediate complications, to say nothing of those who have perished due to more ancillary complications: not being able to get a hospital bed for another condition, not having access to the social services that helped keep them alive. It is a heavy thing to know the weight of the forest as you watch individual trees be felled.

I am still standing.

That’s not a brag, or even a point of pride here. It’s just fact. I have lost, our families have lost; we are all tired of watching Death come for our own.

There are moments where I have absolutely wanted to give up and lay down, let my body be consumed by earth or fire or water, and join my son and my beloved in the stars. I have no shame in admitting that.

And so the songs go:

“How do I breathe without you, if you ever go.”

“I could never live without your love.”

And here I am. Living, breathing, carrying on.

Grief has torn me to pieces so small that it’s a wonder there’s enough left to be stitched back together, and makes it hard to find the needle and thread. But I’m holding on, if (at times) for no other reason than my body isn’t done with me yet.

We talk about this love, this undying emotion that is so strong it would kill us to lose our partner. We hear the songs and stories about elderly folks who pass on within days or hours of each other. We read and watch The Notebook. We talk about dying in the same moment, so we are never without.

In the movie Midsommer, (possible spoiler alert, but it came out in 2019, so catch up), the couple whose “time has come” is preparing to jump to their deaths. One has accepted this, the prescribed end of his life. His wife has not. She weeps and wails, not ready, even though her love is laying below, bloody and bludgeoned and gone. I can’t tell you if she is “assisted” over the edge, because I closed my eyes. I couldn’t watch.

“I don’t want to even breathe.” Too bad. Your body just keeps breathing, your heart keeps beating. It requires far more action to stop those things than you have the energy for. Even if you just sit there, wishing to go gently into that good night, the time passes. People urge you to eat, drink, live, and at some point it becomes easier to give in to that than fight it. Grief demands the path of least resistance. You take the road that requires the least amount of energy and effort, because you have neither to give – but you are still on that road.

I have lost, immeasurably. And while it’s hard, I still want to live. I want to continue. Some days more than others, some hours are spent just letting the time pass and my body breathe for me; but I want to live, even without Hawthorne, without Oscar. I know that I have their love, I just don’t have them with me here.

Sometimes when these songs come on the radio, I get angry. There’s no choice, I scream out the open window on the highway. That’s not how it works. Sometimes I cry, tears slowly rolling out of my eyes. Sometimes I just shake my head at the audacity of the songwriters to think that life stops because the body that held your love died.

I have likened both Oscar’s and Hawthorne’s deaths and the days that followed to being on a train, speeding through the land. Inside the train car, everything is still; everything is how they left it, nothing is touched. There’s some change from the sway, the outside pressures of acceleration and movement and disturbances, but it’s almost like you remembered it.

Then you look out the window and see everything rushing by, and you realize, the stillness is false. Time hasn’t stopped out there, all around you. Life continues. And at some point, you have to get back outside the train car.

It hurts my heart to think about how many people are going through this; hundreds of thousands of people who may not have had to face it right now, were it not for the pandemic. I see the struggles my friends are facing with their family and friends. I am primed for bad news at any moment, guarded constantly. This isn’t living in fear, it’s living with reality. The forest is vast, and each tree cut down is a fresh wound to it, no matter what view you are taking.

One artist Hawthorne and I never got to see live was Jason Isbell. I’m getting to the point where I can listen to his song “If We Were Vampires,” again, without H, but rarely without crying. And while I’m not ready to see time running out as a gift, I can at least be grateful to a songwriter who understands both the depth of love we had, and the cold, hard truths of mortality.